PROVIDENCE — For nearly four years, Francis White was addicted to synthetic marijuana, a drug typically manufactured in Asia and sold on the streets as K2 or spice. 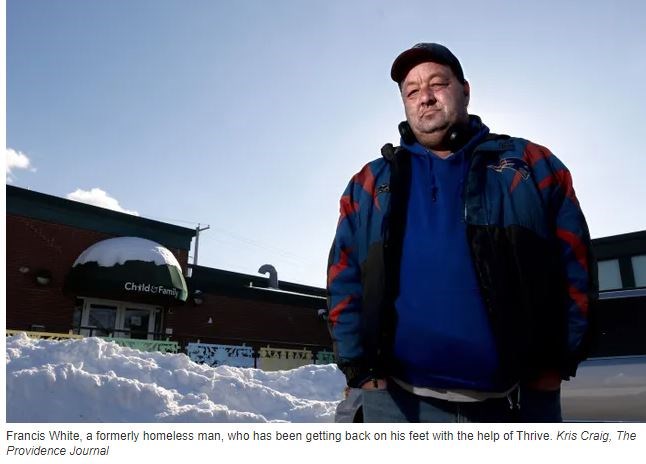 “I had a family to go live with and everything, but I was just more interested in getting out there, getting money somehow, to get that K2 stuff,” White, 48, told The Journal.

White became homeless. “I basically was using my food stamps to get food to eat,” he said. “And sometimes if I had enough money, I would get a hotel room here or there, and sometimes I wouldn’t sleep at all. I’d be walking around downtown, Kennedy Plaza, or wherever.”

Five years ago, White said he “finally decided to kick it.” With the help of Megan Smith, a noted advocate for the homeless, he was connected to Thrive Behavioral Health, a nonprofit agency that serves some 3,500 clients annually. Thanks to Thrive, White, who lives on a Medicaid disability, today has an apartment and a record of more than five years in recovery.

But other needy Rhode Islanders do not share his story of success.

Like similar organizations around the state, Thrive continues to experience a workforce crisis, with high vacancies attributable to COVID absences and some staff members leaving the field for higher- paying jobs elsewhere. Add in a statewide shortage of shelter beds and affordable housing units, and you have what Jamie Lehane, president and CEO of Newport Mental Health, calls “a human crisis.”

In an interview with The Journal, Lehane said many of the clients nonprofit Newport Mental Health helps live with “complex substance-use and mentalhealth disorders.” Thrive president and CEO Daniel J. Kubas-Meyer said many of his agency’s clients fit that description, too.

And so do many of the people served by Woonsocket-based Community Care Alliance, according to president and CEO Ben Lessing.

This winter, Lessing said, CCA has been using its own buildings and a government voucher program that buys rooms in motels to provide housing for nearly 200 people. That has been supplemented by its Main Street, Woonsocket, Safe Haven drop-in center, which offers food, clothing, harm-reduction supplies and other essentials, and a weekly visit by Thundermist Health Center’s Dr. Nithin Paul — but no overnight housing.

“We are operating Monday through Friday from 9 to 4, and we get generally about 50 to 60 people coming through each day,” said Michelle P. Taylor, CCA’s vice president of Social Health Services. “They need everything. They need clothing. They need food. They need bus passes. They need hygiene supplies. They need access to showers and laundry in a laundromat.”

She added: “Compounded by the workforce shortages and then also the fact that around the holidays we got really slammed with COVID, the staff that we have remaining are just exhausted. Exhausted to the point of their own mental breakdowns.”

Things could worsen, according to Lessing.

“This motel voucher program ends at the end of March,” he said. “Right now, through the program we are sheltering 96 people: individuals and families with children.”

When the voucher program ends, he said, “many of them, particularly the individuals, will head right back to the street.”

As for his staff, Lessing said “they have just been flat out. Most of them have had COVID and are recovering, but they’re just exhausted in terms of trying to keep up and trying to keep people safe.”

“It’s been extremely troubling from the perspective of just trying to get many of these folks safe, particularly during the coldest parts of the last month or so,” he said. “That’s when we decided we needed to do something out of the ordinary: We opened up one of our buildings and created a winter shelter. We have been operating it on and off for the last almost month.”

Lessing, Lehane and Kubas-Meyer said market forces are working against them in their efforts to place clients in safe housing. The pandemic has driven purchase and rental prices for houses and apartments to historic levels and with the federal moratorium on evictions having expired, some tenants have been forced from their homes.

“For folks who are losing their housing and trying to find other units that are affordable, it’s becoming more and more critical,” Kubas-Meyer said.

“It’s almost impossible here,” Lehane said. “The small rentals, the auxiliary apartments, those kind of things, have all gone to Airbnb here in Newport. Local people who are working full-time jobs on Aquidneck Island cannot maintain reasonably affordable housing. The folks that were low-to-moderate income — they’re being evicted. They’re moving off the island.”

Earlier this month, Gov. Dan McKee announced a $13-million program that will buy land for building new homes. That was on top of $15 million lawmakers authorized for housing earlier this year. In his budget for the next fiscal year, which begins on July 1, the governor has proposed spending $250 million.

That will help long-term, Lehane said, but more is needed now.

“There is such a crisis out there,” he said. “This is much bigger than what people see.”

In response to inquiries from The Journal, the offices of the governor, House Speaker K. Joseph Shekarchi and Senate President Dominick J. Ruggerio cited initiatives aimed at addressing staffing shortages and improving services.

According to House spokesman Larry Berman, a plan to use $119 million of the state’s $1.13 billion American Rescue Plan Act (ARPA) funds was approved by the General Assembly in January and signed into law by McKee. It included “$22.4 million for the Behavioral Health Recruitment and Retention Program,” Berman said.

But that money, Lessing said, “will only last a handful of months at best. This is essentially similar to ‘hazard pay’ that has occurred during the pandemic in many organizations. There is no longterm plan to support and invest in these positions.”

Here, too, Lessing took issue, saying “these funds as proposed by the governor are also to be used for infrastructure funding for Certified Community Behavioral Health Centers, which means that these funds will be available not only for them but conceivably other organizations including hospitals. Both of these efforts are extremely anemic in terms of strengthening the behavioral health system overall.”

A program that works

Francis White is testament to the fact that adequately funded and staffed programs work.

Thrive, he said, has “helped me out tremendously. They have some awesome caseworkers there.”

White has benefitted from a grant to the organization from the state Department of Behavioral Health, Developmental Disabilities and Hospitals known as “CABHI,” for “Coordinated Agreement to Benefit Homeless Individuals.”

“Our client is an outstanding example of how the grant funding was utilized in assisting a vulnerable individual by providing affordable housing and serving as a forum to engage with him over his needs for psychiatric, medical, and ongoing housing-involved supports,” according to Tripp McCreery, Thrive’s Housing First Lead Case Manager.

“One of the facets of the grant was that enough individuals align with Medicaid for the purpose of billing and to ensure that the housing arrangements remain in place while the Thrive program is able to continue to provide their services,” McCreery wrote in an email.

“This is a great example of a ‘spendup- front-to-save-in-the-future’ mentality when it comes to aligning these supports for those individuals experiencing homelessness,” he added. “Emergency-room costs and Medicaid spending are offset by contributing consistently towards means to end homelessness.”

Said Kubas-Meyer: “We know the programs that need to be put in place, the types of wraparound services that are needed to keep not just folks off the street but persons with mental illness further along on their path to recovery. We know what works. It just has to be funded and it has to be funded adequately. We’ve gone too long with inadequate funding and it’s just put an unreasonable strain upon the system as it currently stands.”

Lessing said: “There needs to be much more focus and creativity in terms of immediately saving lives. And then beginning to build out a more comprehensive, coherent system.”

Rhode Island had such a system decades ago, when the human warehouse known as the Institute of Mental Health closed and taxpayers, governors and legislators supported the model community system that was built to replace it.

But support for maintaining that system faded over the years.

Lehane is not optimistic of a quick return.

“There is no political will or interest to address these problems,” he said.

Agencies by the numbers