Ambassador on a Bike

by John Howell, Editor
Published 4/12/22 in The Warwick Beacon

How fast can you go?

It’s a question Bob Walker expects when asked about the electric bicycle he’s built and rides – except for rainy days when he take public transportation  – from his apartment in East Greenwich to Hillsgrove House on Minnesota Avenue in Warwick. Speed is not what Bob is about. Rather, he’s focused on sustainability and (as he puts it), the three legs to his life – housing, socializing and medicine. Without one of the legs, like a three-legged stool, it won’t work. 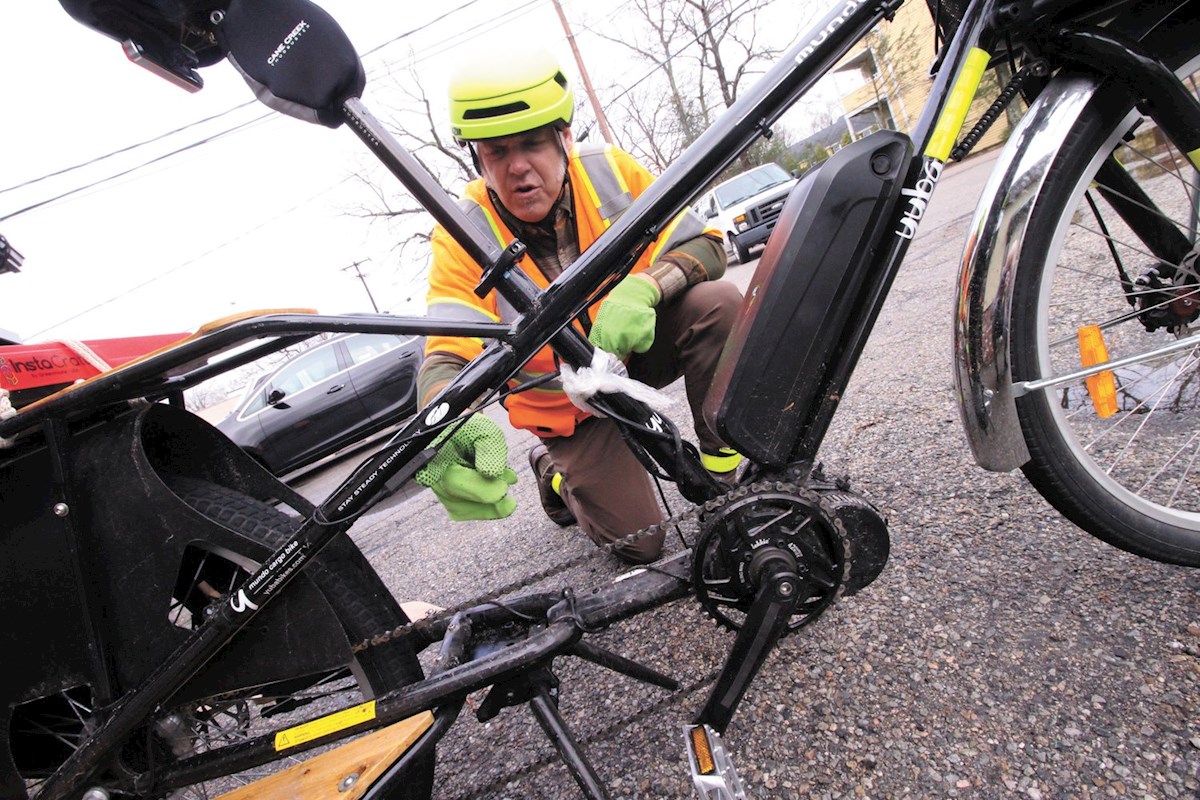 (Pictured Left) THE POWER OF CHANGE: Bob Walker points to the engine and the battery pack on the electric bike he built. (Warwick Beacon photos)

For a good portion of his time on Earth, from age 17 to 45, Bob says “I wasn’t well.”  He was diagnosed with schizophrenia. Bob didn’t understand his illness. He had difficulty keeping a job, making friends and enjoying life. He discovered he had a low tolerance for foreign substances – he names marijuana – and loud noises.

He was in and out of hospitals and spent a year in the Institute of Mental Health, now named at the Eleanor Slater Hospital, where he was when his mother died from cancer. He wasn’t allowed out to even attend his mother’s funeral.

He was homeless for two years, living in a tent in the Snake Den State Park.  He tried homeless shelters, but didn’t feel like he belonged there. Besides, he couldn’t tolerate the body lice.

That was hard to believe Friday morning when Thrive Behavioral Health hosted a breakfast at Hillsgrove House bringing together state legislators and Thrive board members. Bob was mingling with the legislators and later showed off his electric bike.

Thrive had prepared for the event and to get across the message it needs additional funding to continue providing services to the mentally ill. There were handouts for the legislators and placard displays of key points from a February-March survey of 500 residents finding 43 percent of Rhode Islanders have felt there was something wrong in terms of their own mental well-being in the past year.

Daniel Kubas-Meyer director of Thrive is not surprised by the finding.

He points to the pandemic and how it has impacted our lives and especially our children. The survey found 60 percent of Rhode Islanders felt there was something wrong, or were unsure if their child needed mental healthcare.

Addressing these issues has become increasingly difficult for Thrive that services between 3,000 and 4,000 patients annually because of the level of Medicaid reimbursement that hasn’t be increased in nine years.

“We know what to do,” says Kabas-Meyer, but faced with declining resources the agency isn’t capable of meeting all the needs. Kubas-Meyer doesn’t fault therapists, clinicians and other staff who have left to take higher paying jobs at the DCYF and other agencies that in some cases is paying $15,000 more a year. DCYF is a federally funded healthcare center as are a number of centers including those operated by Thundermist and Comprehensive Community Action Plan with higher rates of reimbursement. It should be noted the community health and behavioral centers aren’t providing the same services even though many professionals are qualified in either of the two fields.

The Thrive staff numbers 322, down 49 from where it was a year ago. Thrive can’t fill the jobs.

“Our rates are fixed, we want to pay a fair wage,” said Kubas-Meyer.

The message from Horizon Healthcare Partners, of which Thrive is one of seven member agencies, is for legislators to approve three bills aimed at improving access to mental health and addiction, conduct an analysis of costs and needs as well as rates and to establish in Rhode Island the certified community behavioral health clinic (CCBHC) model used in 40 states. The CCBHC model, proponents reason, would increase access to mental health and substance use disorder treatment, expand the state’s ability to address the overdose crisis and establish partnerships with law enforcement, schools and hospitals to improve care, reduce recidivism and reduce hospital readmissions. A third bill would authorize use of $75 million in American Rescue Fund Act (ARPA) funds to create a community mental health services revolving fund for the construction and renovation mental health facilities.

The bind, explains Cliff Cabral, CEO of Partners, is that rates paid by Medicaid (50 percent paid by the state and the balance by the federal government) have not changed in years leaving the clinics unable to compete for professionals to deliver services coupled now with the impact of the pandemic with fewer candidates for jobs and an increase in people needing help.  Cabral said agency partners collectively employ about 2,000 employees in the state.

Bob mingled with the group, an ambassador for Hillsgrove House. He understands the work of Thrive and the importance of the legislation.

Hillsgrove House is a big part of Bob’s life. He’s there volunteering four days a week. He does a bit of everything from administrative work to mopping the floor, gardening and running meetings. Hillsgrove House and his church make up the social leg to his life.

The son of a Unitarian minister, as a high school student Bob imagined a career in nuclear physics. He remembers being told he was “bright” and dreamed to going places. Then at 17, he began hearing a voice in his head and he felt he was living outside his body. He smoked marijuana but didn’t touch alcohol that he calls “a hard drug.”  He found it difficult to focus and was troubled. His friends and family members told him to “snap out of it” and move on with life.

But he couldn’t. He lacked motivation and felt isolated. He attempted suicide, which he is now happy wasn’t successful. He ended up in a hospital and after being released went back to the marijuana. It set him in a tailspin.  He now understands it is a foreign substance his body can’t tolerate.  He worked as a dishwasher but he found he lacked “the get up and go” to find something better. Then came the “long stay,” a year at the IMH.  When he left he was referred to the Kent Center, which is now Thrive. They found him group housing that transitioned into supervised apartments and then Section 8 housing in East Greenwich. He sees housing as critical, adding the center also provided a plan to manage his medication.

“I can’t do it alone,” he said. He understands his illness and his limitations.

Citing the benefits of the legislative package, Bob said, “my passion to have Thrive thrive…they think of you as their family.”

The electric bike, he says, wouldn’t have happened without the relief checks that came in the wake of the Covid shutdown. The money enabled him to buy parts for the bike assembled on a Mundo cargo bike frame. He watched  YouTube instructional videos frequently replaying segments until he got it right. He said it took him two months to build, but now that he’s done it he thinks he could do another bike in a week.

Bob put disc brakes on his bike – “when you stop you want to stop” – and wrapped wheel spokes with reflective tape. So far he’s logged 5,000 miles and questions those interested, “what do you think it cost me in electricity.” The answer he proudly provides is $24. He gets about 30 miles on a charge.

The bike has given Bob more than independence. It’s an accomplishment and a means of paying back. He views his Social Security and Disability checks as pay for his volunteerism.

Oh, and how fast does he go?

Bob says he doesn’t push it beyond 15MPH.

For Bob it isn’t not how fast you got there, but what you do when you get there.